Rieck brings hightech to the IFA

Berlin, 2 September 2015. Between 4 and 9 September, manufacturers of household and consumer electronics will present their innovations at the IFA in Berlin, the world's leading trade fair for consumer electronics and home appliances. One well-known producer from China has commissioned Rieck to take care of its logistics for the fifth time.

The trade fair begins in early September; Rieck's preparations, however, begin weeks earlier. The logistics service provider ­imports two 40-foot containers full of refrigerators and LCD televisions by sea from China. Rieck transports other devices by road from production sites in Germany, France and Poland, as well as by air from Las Vegas and Thailand. Right on time for the IFA, all the exhibits are on display in Berlin - brought and assembled by the Rieck exhibition logistics team.

To the fair and back again

When the sea cargo containers arrive at the Port of Hamburg, Rieck Sea Air Cargo takes care of customs clearance and organizes the transport to Berlin. Here, the Rieck exhibition team unloads the containers and removes theouter packaging. Together with the predelivered consignments from Europe, ­the USA and Thailand, Rieck transports the exhibition equipment and merchandising articles to the exhibition site. In the respective halls, the company's employees mount the exhibits on pedestals. If a device is damaged during the fair, Rieck immediately replaces it with a new one. Replacement devices are stored on the site of Rieck Projekt Kontrakt Logistik Berlin.

When the IFA closes on September 9, Rieck is ready to start the disintegration work. The trade fair team supplies special packaging material, packs the devices professionally, and organizes the return transport. The most valuable prototypes­ travel back to China while the other devices go to the customer's sites throughout Europe. 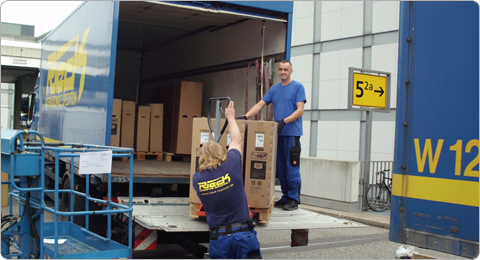